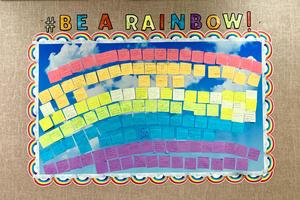 What started as an icebreaker to welcome staff back to a new school year, cascaded into a movement of kindness throughout the West Valley High School campus.

West Valley High School Principal, Shannyn Cahoon, approached her Building Assets, Reducing Risks (BARR) Coordinator, Amber Bohac, and asked if she could provide an icebreaker to welcome staff to a new school year. Bohac decided to use an activity from BARR, “A Rainbow in the Clouds.” The purpose was to recognize individuals who provide support and kindness to people when they are down and recognize how to support someone else when they are faced with challenges. Staff was then asked to make a commitment in which they would be a rainbow for someone who has clouds in their life.

Each staff member at West Valley wrote his or her commitment on a sticky note. Some staff members committed to greeting students with a smile every day, to be purposeful with encouragement by telling people what they are doing right, to call parents with positive comments about their child, to let students know how much they believe in them, and to be a good role model for people on campus. Each sticky note was used to form a rainbow and placed in front of the staff entrance to serve as a reminder of their commitment.

The first day of school was the shining moment for staff; would they implement their commitments and work together to provide a more welcoming and positive environment for students and staff? Not only did staff rise to the challenge, but a funny thing began to happen. Students began to observe these little acts of kindness and, in turn, performed their own acts of kindness. Students began opening doors for each other, thanking individuals for handing them something and helping fellow students in need.

Staff reported that they observed a special education student had been separated from their class, so two students decided to stop what they were doing to escort the student back to their correct classroom. Another student was having a hard day and was sitting outside by himself; another student noticed the student was having a bad day so they offered to sit outside and keep him company.

“I believe the way you start a school year determines how the rest of the year will go,” said Bohac. “Culture is the number one driver of a successful school and positivity changes the culture on campus. It’s contagious.”

Bohac said she will be looking for ways to encourage the continuation of this behavior throughout the school year. She said BARR students will be doing the “A Rainbow in the Clouds” icebreaker during the first triad and hopes this will continue to inspire staff and students to continue these acts of kindness and be a rainbow for someone who has clouds in their life.