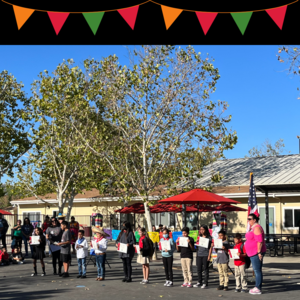 Eleven hard-working HDLA English Learner students who met all the reclassification requirements were awarded for Achievement of Reclassification. Reclassification is the process whereby a student is reclassified from English Learner (EL) status to Fluent English Proficient (RFEP) status. During the ceremony, Mr. Eduardo Rodriguez shared with the audience that his struggle to reclassify took him to tenth grade and expressed how proud he was of these students for meeting this goal prior to leaving elementary school."As a Dual Language school our focus is to facilitate the transfer of skills between languages. It is the perfect setting for Emerging Bilinguals, also known as English Learners, because in addition to retaining their native language, they become truly multilingual. We make it a point of importance to celebrate our Emerging Bilinguals because the criteria to reclassify as English Proficient is so challenging!  At HDLA, this milestone is at the heart of our school culture.”

The event was attended by the entire school and parents of honored and performing students were also in attendance. Third grade classrooms helped highlight Mexican Independence Day and Hispanic Heritage Month with a performance of Cielito Lindo from Maestra Huerta's class and La Raspa from Maestra Martinez's class.  Performers and staff were dressed in traditional Mexican attire for this event.

Principal Dr. Kristi Watson shared, “We were very excited to celebrate 11 scholars who have made their goal to reclassify to Fluent English Proficiency.  They have worked very hard alongside their teachers to meet four (4) very demanding benchmarks in order to make this accomplishment.