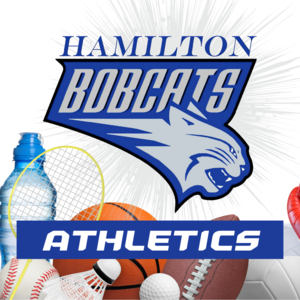 Hamilton High School athletes have much to brag about this season! Several teams excelled to league finals, won championships and qualified for several events.

The school's baseball team finished 2nd in the Arrowhead League with a record of 4-4 and played in the CIF Wild Card Game vs. Mountain View High School.

The girl's softball team went 8-0 in the Arrowhead League to win the league Championship!

They were led by seniors Jackie Blanco (Pitcher), Jackie Orozco(Left Field), and sophomore Ashlynn Rozzo( Catcher). The Lady Bobcats won their 1st round playoff game vs. NuView Bridge 18-12. It was a quality win with the team battling back from 7-0 after 2 innings. Great pitching and hitting brought the team out of that deficit to take the lead in the 5th inning and were helped by Ashlynn Rozzo's inside the park Grand Slam.

The boys and girls track teams both won the Arrowhead League Championships!

11 athletes qualified for CIFSS prelims in Carpinteria, California. Gwen Vanzile qualified in the High Jump and Long Jump, Olivia Lopez in the 800m, and Stephanie Martinez-Anaya in the 1600m and Triple Jump.

The 4x100m Relay team qualified with freshman Alex Valasquez and David Perez and seniors Derick Brown and Hunter Blackmore. Hunter Blackmore also went as an individual in the 200m and Long Jump. Derick Brown qualified in both the 100mh and 300mh and Gabriel Garcia represented Hamilton in the Discus throw. All athletes competed well against tough competition but failed to move on to CIFSS D4 Finals this weekend.

Kudos to these outstanding athletes for an outstanding season and to their coaches for their commitment to coaching with great distinction! Congratulations to all!